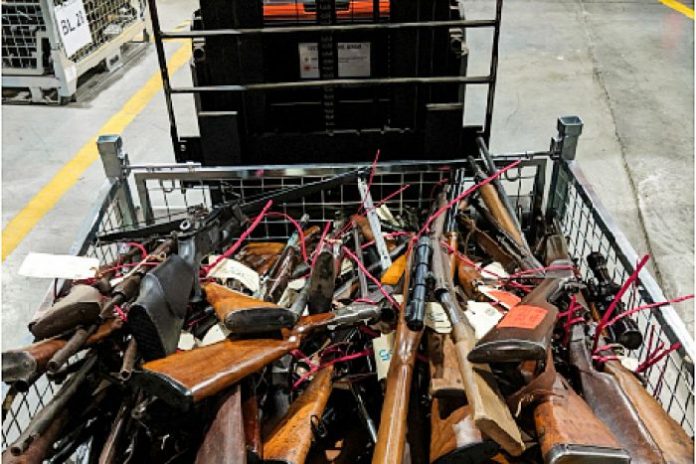 A three-day search of hidden rooms in an Adelaide Hills property ended up with the discovery of several firearms which among them included an assault rifle that has raised the concern of the community. Over 200 weapons were found during the search which included different kinds of equipment such as daggers, throwing knives, reloading equipment and military grade ammunition. Some of the weapons and ammunition were hidden throughout hidden rooms and about 38 firearms were fount that were registered.

The find that was “disturbing and shocking” showed that there were 203 illegal weapons found along with 38 registered firearms as claimed by Superintendent Stephen Howard. It took the police a great amount of time to uncover what they believe are all the hidden rooms and after the search that had been going on for three days they believe that they had located all of the firearms as well as more than 200 kilograms of ammunition which included several military grade ammunition.

The search brought about several weapons that included pistols, shotguns, a machine gun and even an SKS assault rifle as described by Superintendent Howard. Assault rifles are considered very strictly-controlled weapons in South Australia as based on his statement and he mentions that to have them you would need a very good reason to.

Weapons such as the SKS assault rifle are weapons that are made for war and have the main purpose of killing people. This has brought a large amount of concern due to the finding of such a weapon and which had been designed mainly for booth shooting and engaging people in melee combat, this may lead to the conclusion that the intentions were indeed very bad and such weapons in the wrong hands would not lead to anything good. Used firearms website GunHub notes that SKS’s were once popular in Australia prior to the 1996 gun buy back, with many SKS rifles never being handed in and instead becoming unregistered firearms.

A 53-year-old man was arrested on a Friday night at a rural property located in Adelaide Hills (where the weapons were hidden) and charged for firearm offences as well as “the indecent filming of a person who is over the age of 17” as well as “threatening to distribute invasive images” and had refused bail was expected to have an appearance at the Magistrates Court. He had showed up to court on the scheduled date yet did not have any claims nor did he mention anything. A lawyer was present for him and did not apply for bail. It is said that this time, the suspect who is accused has been rescheduled to appear next year around May. The man’s identity has been concealed at the moment.

Due to the complexity of the case, prosecutors have requested for a longer amount of time which is considered unusual due but required due to the situation, resulting in the long wait for the next court date.

This has become very concerning in most cases as how this man had been able to get all these weapons in one location without people knowing can turn into a big issue and although his intentions are unclear, the mere issue of having such weapons and in such an amount could not lead to anything good. Weapons of war that are put in the wrong hands and brought to areas such as this place could only result in danger for the people around the area and the discovery of such a haul of weapons has definitely prevented unwanted catastrophe.